In the Journal of Biomechanics, Camargo et al. introduce a novel dataset containing information from kinematics and kinetics and power at different conditions of locomotion, including walking on treadmill, level ground, stairs ascending, and descending, ramp ascending, and descending. The dataset serves as a detailed compendium of information to establish a characterization of community ambulation on multiple contexts of walking speed, stairs height and ramp inclination. In addition to the biomechanics information, we provide the signals of wearable sensors including IMU, EMG and goniometers. This dataset offers a much-needed source of individual trials containing kinematics, kinetics and power together with sensor signals during human locomotion. See below to get more details about the experiment in the interactive display, or just go ahead and (get the dataset!)

The dataset contains the locomotion in multiple contexts, including: different heights of stairs, inclination of ramps, speed of levelground and treadmill. 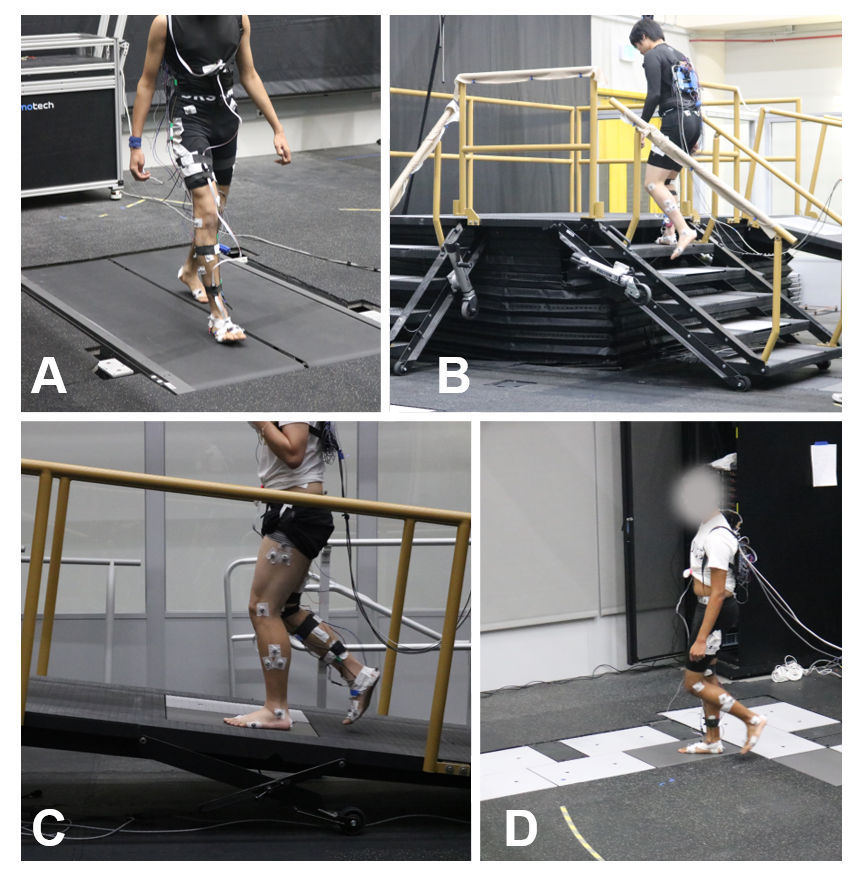 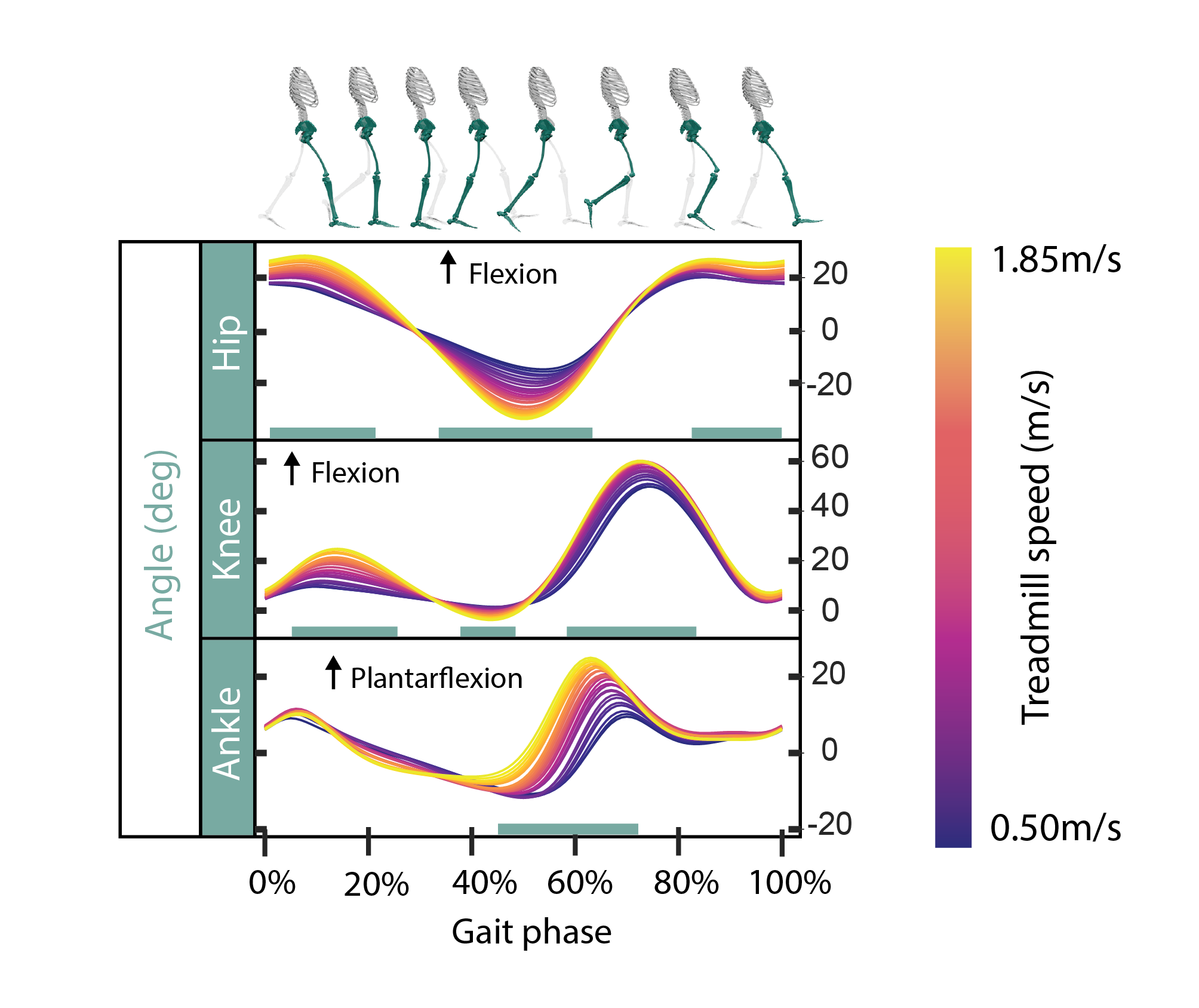 Treadmill walking data was recorded on intervals of 30 seconds at each of 28 different speeds ranging from 0.5 to 1.85m/s with increments of 0.05m/s. This gives a detailed resolution as it has not been reported before. The figure shows the average kinematics of walking on treadmill computed from the dataset. 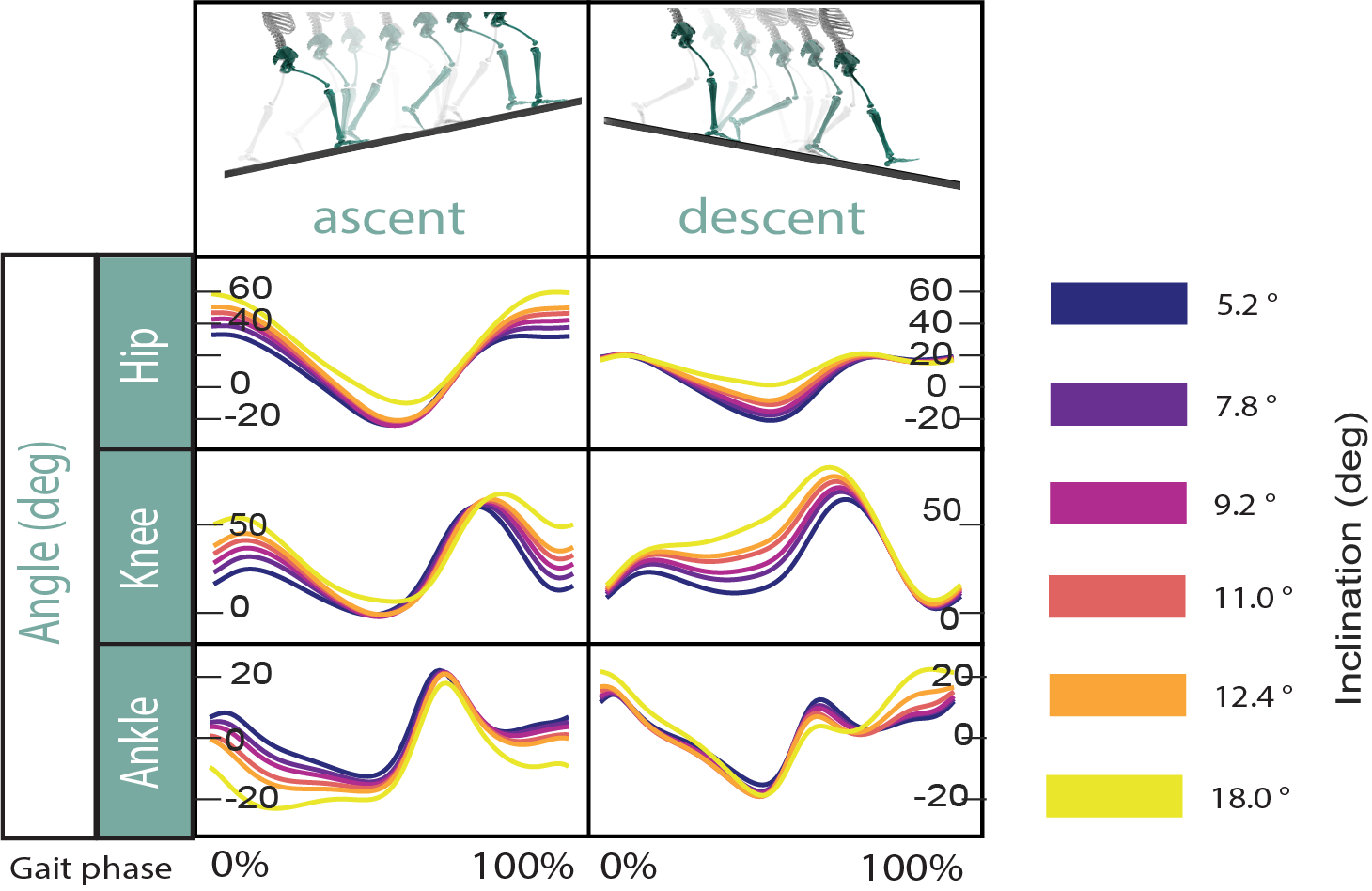 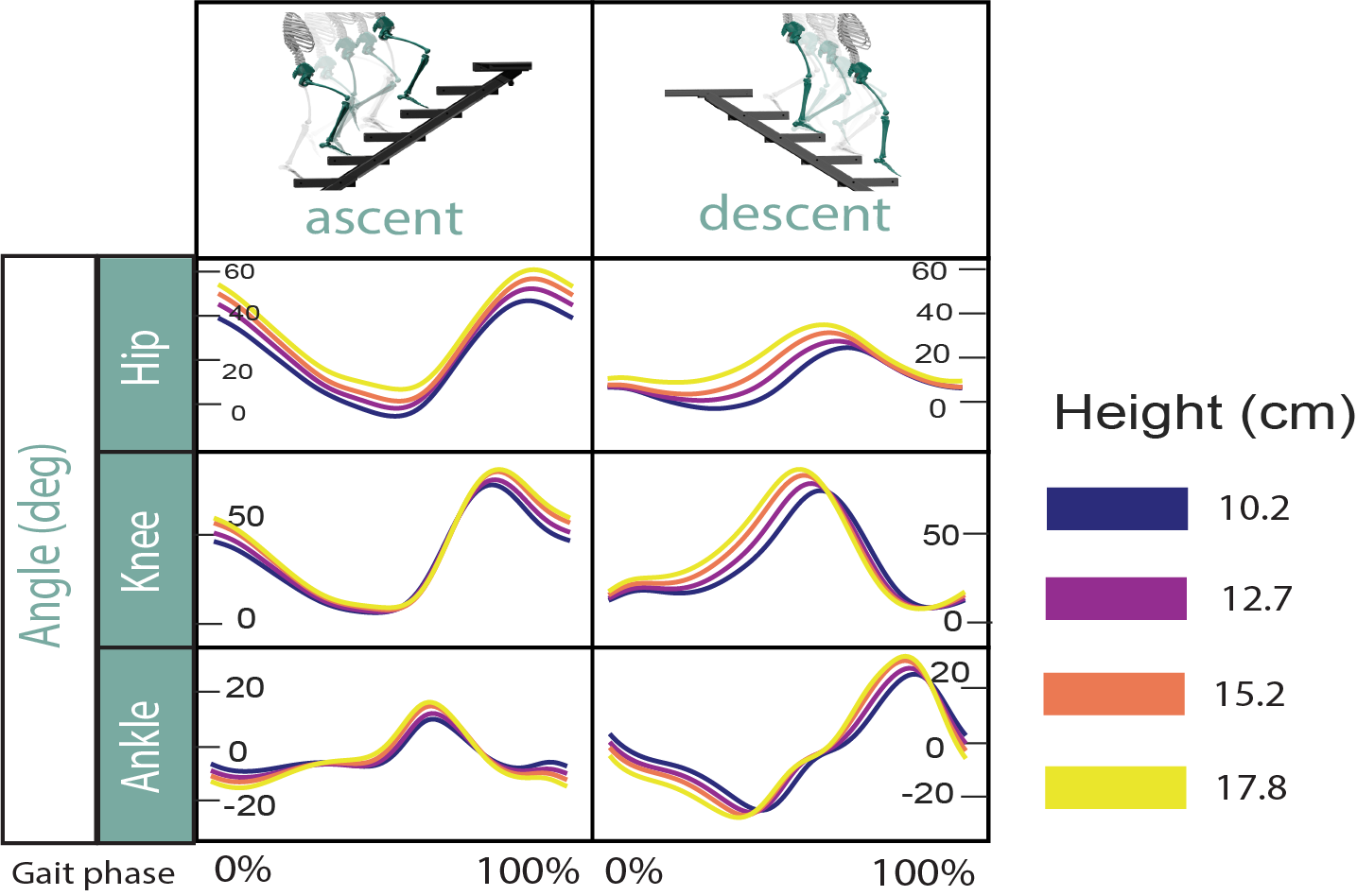 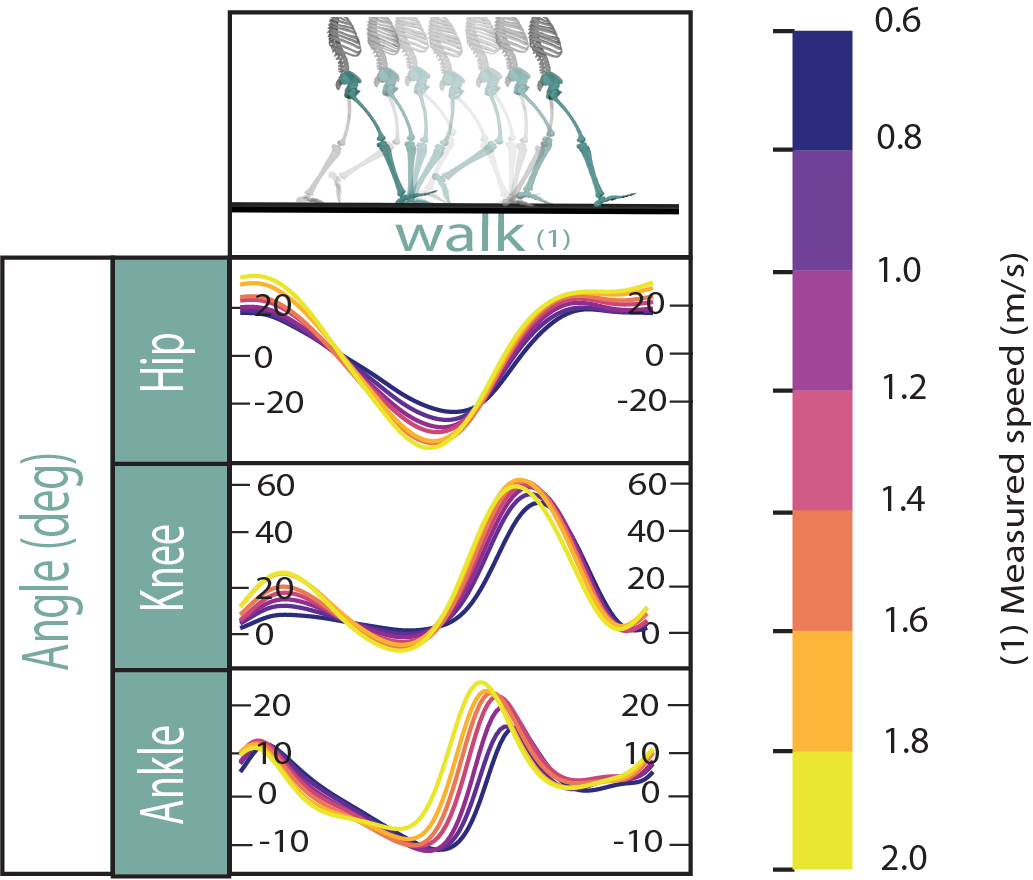 Level ground walking consisted of 10 circuits at each of three different walking speeds: slow, normal and fast, relative to the subject’s preferred speed.
The image presents a sample of the data.

The data collected includes EMG, IMU, goniometers, motion capture markers and forceplates. Check the interactive layout to see more information about each sensor and information contained in the dataset.

IMUs are placed on the trunk, thigh, shank and foot.
They capture acceleration and gyro data is the X,Y and Z directions.

EMG electrodes are placed on the following muscle groups:

Goniometers measure the changes in the posture for the angles at the joints. They are placed on the following joint-DOF:

Ground reaction forces were recorded using force plates located in the instrumented treadmill and level with the floor, ramp and stairs. 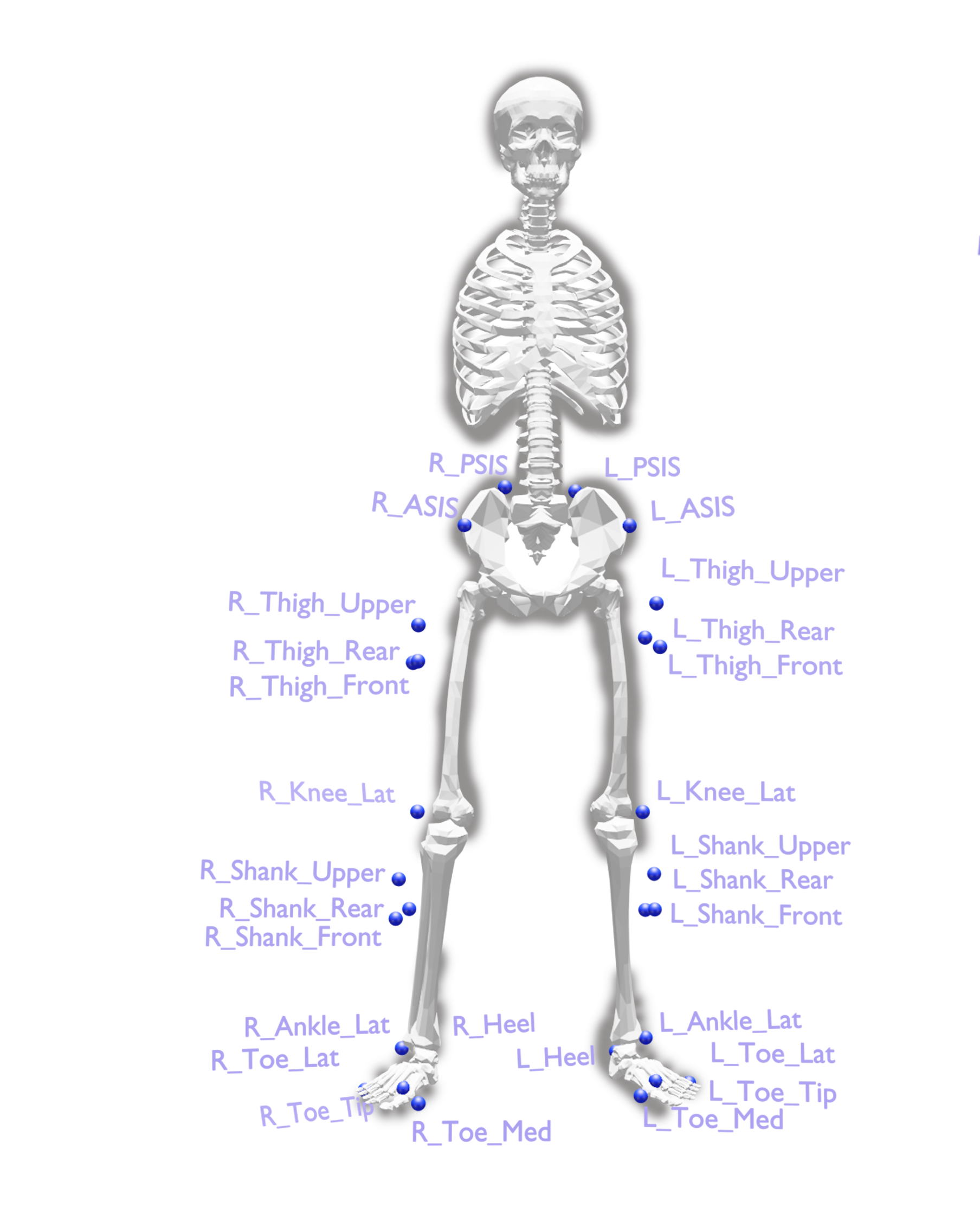 Markers are placed following a modified Vicon-Plugin gait configuration. With the marker data and the forceplate information the inverse kinematics (IK) and dynamics (ID) are computed using

Data access is provided here with a public-view Dropbox directory (direct link). You can download the entire database or partial files. We recommend to download each subject individually (~1GB per subject)